All at sea? Network Rail backtracks on beach plans

Network Rail will ‘refine’ plans to improve resilience along a 1.8km stretch of railway in the South West after more than half of respondents to a consultation expressed disapproval.
Brought By
#Rail

Network Rail will ‘refine’ plans to improve resilience along a 1.8km stretch of railway in the South West after more than half of respondents to a consultation expressed disapproval.

More than 1,600 people responded to a six-week public consultation on proposals for the line between Parson’s Tunnel and Teignmouth, which is bordered by steep cliffs on one side and the sea on the other. 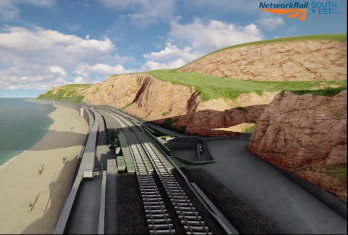 An image of the most recent proposal

The plans would have seen the track realigned to create space to stabilise the hazardous cliffs and protect the railway for future generations. A realigned coastal footpath would also be built, along with a new landward path and accessible footbridge across the railway.

However, the realignment away from the cliff would mean taking up some of the beach. Network Rail said that since a first round of consultation last year, the plans had been revised to retain more of the beach and improve leisure access.

But a consultation on the new plans earlier this year saw more than 2,840 people attend 11 community events at which a 10m-long scale model of the scheme was on display.

Although 73% of people agreed/strongly agreed that this stretch of railway needs to be more resilient, 51% disagreeing/strongly disagreeing with Network’s Rails proposals.

More than half (54%) of people supported or strongly supported the creation of a new coastal path and amenity.

Great news for the people of Teignmouth who are fighting this from @HEDanielClark https://t.co/ILYJ7e3Gmy

Mike Gallop, Network Rail’s director for the Western route, said: ‘We received some good and considered feedback which can positively influence our plans, and it is important that we get this significant scheme right.

‘As a result of the feedback we are now refining the plans even further with a view to then sharing these revisions with the public next year. We’ll now spend the next few months working through this detail, once we have our refined plans we will schedule a further round of public consultation in 2021.’

Network Rail said in January that it was likely to apply for a Transport and Works Act Order (TWAO) for the works later this year, once feedback was received from the consultation.

Mr Gallop said that this would now only happen ‘when we’ve done this further work and engagement’.