Four train firms have launched a new pilot in London with British Transport Police (BTP) ‘to further encourage people to wear face coverings’, backed by the threat of removal from trains or fines.
Brought By
#Rail

Four train firms have launched a new pilot in London with British Transport Police (BTP) ‘to further encourage people to wear face coverings’, backed by the threat of removal from trains or fines.

Industry body the Rail Delivery Group said compliance on the railway is around 90% but as of 24 September, BTP has stopped 54,175 people to remind them of the rules, asked 3,842 people to leave the railway and issued 81 fines to those who have not complied. 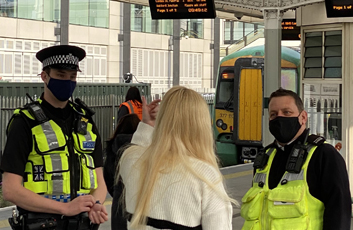 A BPT officer and Southern employee speak to a passenger

The pilot, supporting the industry’s Safer Travel Pledge, will involve a member of railway staff and a BTP officer patrolling stations and trains together.

The RDG said the trial is part of the ‘Four Es’ strategy for face covering compliance: ‘Engage, Explain, Encourage and Enforce’.

It said: ‘While the vast majority of people follow advice about face coverings, fines will be issued to people who do not comply and refuse to leave the railway.’

It said: ‘This does not affect people who are exempt from wearing face coverings as part of the rules, for example due to health reasons.’

Chief superintendent Martin Fry of BTP said: ‘We know that the majority of people want to do the right thing and comply with the law, playing their part in protecting each other by wearing face coverings, not only on trains, but also in stations. Those who do comply with the law, or are exempt, have no need to worry.’

However, since face coverings became mandatory in June, videos published on social media of incidents in which passengers’ assertion that they are exempt have not been accepted by transport staff and police have highlighted a significant legal anomaly.

BTP has acknowledged the subjective nature of the rules that it is tasked with enforcing.

A spokesperson for told Transport Network: ‘As it stands, there is no guidance which identifies specific illnesses or disabilities which are exempt. Officers will be respectful and use their discretion when engaging with passengers who think they are exempt from wearing a face covering.’

The spokesperson added: ‘However, if an officer suspects a passenger is falsely claiming an illness or disability they have the powers to prevent further travel.’

Last week, the Government announced that the maximum fine a person could receive for not wearing a face covering is now £6,400 in England.

The pilot runs until 22 November. The RDG said rail companies and BTP will consider the outcomes, together with trade unions, before deciding ‘how this could inform any changes to current working arrangements’.